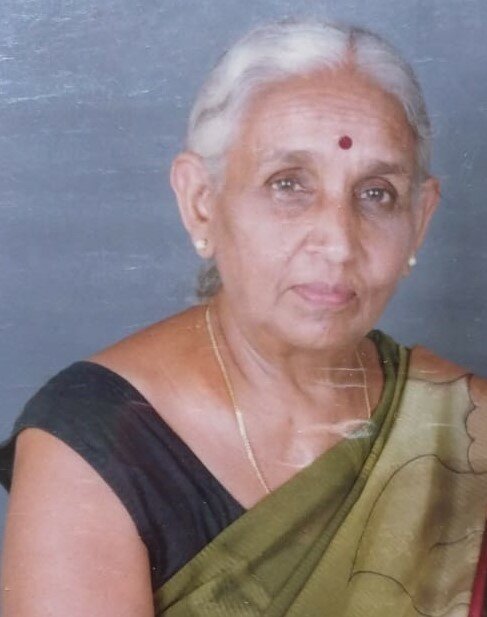 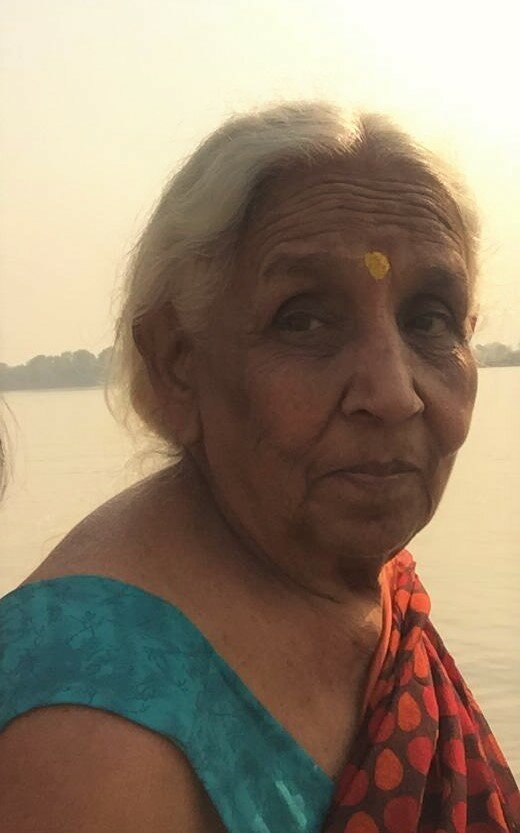 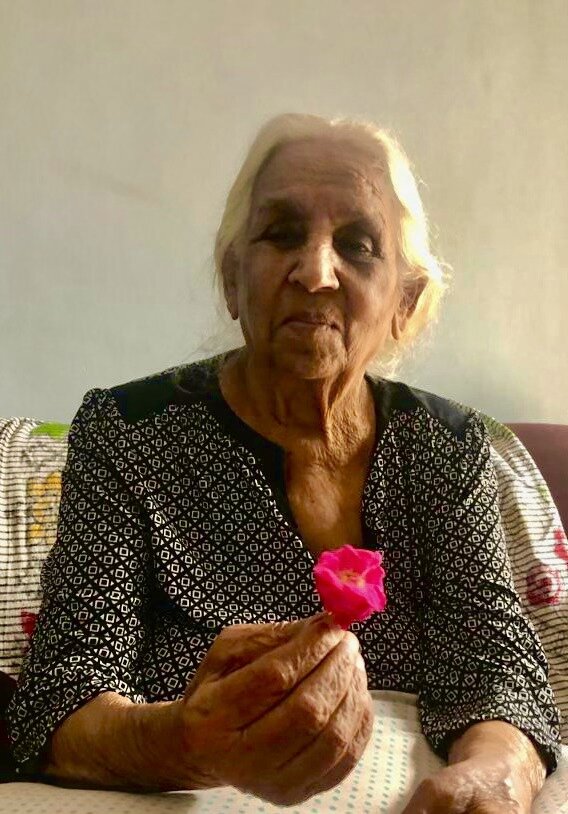 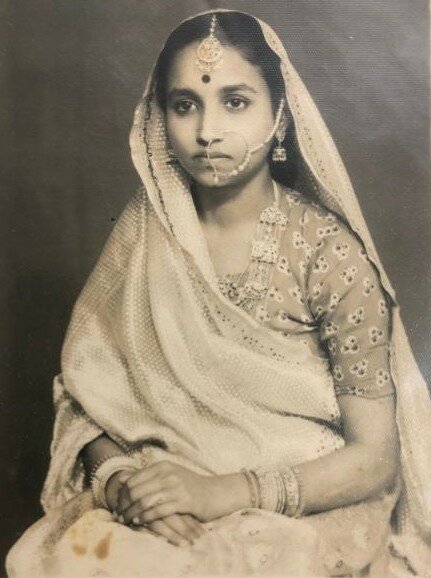 Please share a memory of Vimal to include in a keepsake book for family and friends.
View Tribute Book

A beloved mother, grandmother, and great-grandmother, Mrs. Vimal Sharma, wife of Late Dr. Akhilanand Sharma, went on her eternal journey peacefully surrounded by her loved ones on the late morning of January 10th, 2023. Born on July 20th, 1935, to Triveni and Raghunandan Lal Mishra in Aligarh, India, Vimal was the third youngest of six siblings. She was 87 years old.

Growing up in Agra, Vimal and her siblings were brought up by her father and maternal grandmother as she lost their mother, Triveni, at the tender age of 6. When her father retired, she was the pillar of strength for her family, very close to her father and brothers, and very protective of her sisters. After marrying Dr. Akhilanand Sharma, she moved to live with him in Varanasi. They welcomed their first child, Veena (now Veena Upadhyaya of Ghaziabad, India), followed by their son Anil, who tragically passed away at the tender age of 3 in her arms, leaving a hole in her life that never truly healed.

In the late 1950s, with support from Vimal, Akhilanand immigrated from India to the United States, initially settling in Minnesota with the goal to further his education in medicine and surgery. Soon thereafter, he moved to Boston where he was accepted to Tufts Medical School, receiving his MD in surgery and becoming a pioneer of lung transplant surgery. Vimal and their daughter Veena joined him in Boston in 1963, establishing their family in the United States, where they welcomed their second daughter, Manjuli (now Dr. Manjuli Rani Sharma of Albany, NY). She enjoyed her stay in Boston exploring the Hay Market, shopping at Sears and Filiene’s, taking her daughter Veena to ice skating and swimming, taking classes at Harvard, or just spending time exploring Boston Common with family and friends.

In 1966, once Dr. Sharma’s education was complete, he made the decision to move the family back to India, as he wanted to use his expertise and training to help those in need of medical treatment, especially lung transplant care.The family settled in Varanasi, the town he had initially moved to study as a teen. There, they lived in a house near the banks of the sacred Ganges River, eventually growing the family to add a third daughter, Richa (now Dr. Richa Sharma Tiwary of Ipswich, MA).

Vimal served as the backbone of the Sharma household, taking close care of the family and supporting their daughters as they started growing up. Vimal was always an exceptional cook, a terrific host, a caregiver, and incredibly encouraging and supportive of education for all, especially the children of the household staff. Living in the holy city of Varanasi for most of her life, Vimal was always very religious and dedicated to her beliefs but never superstitious. She would make trips to the banks of the Ganges on a regular basis, as she felt that only the fortunate get the opportunity to take the holy dip.

In August of 2004, she moved to America, this time to East Greenbush, NY, to be closer to her daughters, Manjuli and Richa, and to spend time with her grandsons, Anagh Tiwary and Ekansh Agrawal. Being back in America after many years, Vimal found a renewed love for pizza and was frequently overjoyed by takeout from Pizza Hut. She loved spending time in the household garden and was frequently seen picking flowers, her favorite green peppers, or sitting on the porch soaking in sunlight. She also enjoyed scenic trips to Niagara Falls and to the beaches in New England when visiting her daughter Richa. One of the most memorable journeys for her was visiting her younger sister Mithlesh Kumari Bhateley and her family based in Fort Worth, Texas.

In 2012, she moved back to India to be close to her eldest daughter, Veena, and granddaughter,  Jolly. Vimal also enjoyed the company of her great-granddaughter, Abhilasha, following her birth in 2013, making Vimal the head of a household spanning four generations, a position she humbly but assuredly held. When back in India, Vimal enjoyed her daily routine, interactions with the family, and playing with her great-grandchild after school. She loved bargaining with the vegetable vendors or instructing and chatting with the cook or housekeeper, as she loved to share her experiences with everyone and know what was going on around her. She was always very proud of having her own home, with years of precious belongings from the family’s childhood, time in America, and numerous adventures stored meticulously in iron cast trunks.

In 2020, one of the blessings in disguise of the COVID-19 pandemic, remote work, allowed her daughters, Manjuli and Richa, to join Veena and their Mom in Ghaziabad for an extended period of time. This was the first time since the 90s her three daughters were reunited for a significant period of time in the same home, a moment Vimal dearly cherished.

In 2022, she returned to America to live with her daughter Manjuli, her son-in-law Rajendra, and grandson Ekansh. While there, she was taken care of by Manjuli, who spent every moment she could with her mother. This time Vimal enjoyed visits by family friends based in the area, listening to music (especially songs by Lata Mangeshkar), fixating on shows (by her favorite star Amitabh Bachhan), watching timeless Hindi films (her top favorites being Mughal-E-Azam and Pakizaah), helping and instructing what was cooking in the kitchen (thanks to the influence of chefs Sanjeev Kapoor and Ranveer Brar), and looking at treasured family photos all day long. In this time in Albany, she enjoyed every moment she had with her grandsons, Ekansh and Anagh. However, age was finally catching up with her and her mobility and her health was starting to get impacted by age related health issues. Though her memory continued to fade, she always reciprocated the love that she was given and always blessed those around her to be happy.

On January 4th, 2023, Vimal suffered from a severe stroke, and after 6 long days of treatment with loved ones by her side, she passed away peacefully on the very auspicious day of Sankashti Chaturthi at the age of 87, at Albany Medical Center, Albany, NY.

Vimal was preceded in death by her beloved husband of 50 years Dr. Akhilanand Sharma, her dearest late son Anil Sharma, her parents, her siblings, and her cherished son-in-law Sudhir Kumar Upadhyaya.

The rites will be followed by a religious ceremony and remembrance from 3-4pm on Jan 14th, 2023 at Albany Hindu Temple.

In lieu of flowers, and in keeping with her lifelong support for people in need, donations can be made to the Interfaith Partnership for the Homeless (IPH).

Share Your Memory of
Vimal
Upload Your Memory View All Memories
Be the first to upload a memory!
Share A Memory
Plant a Tree